Skip to content
Two eyes, a lens, and a machine of power far beyond our universe took hold of my conscious being and melted it to the floor. Her stare pierced through each strings vibration, charming them to tingle in the tones of her soul. Vibrations were everywhere, and a taste for sin dove down my spinal cord and into my toes. These girls are sexy, sensual and divine, goddesses harvesting the fruit of my loins through electro keyed funk punk pendulum of poweress metal purities!  A symphony of strings struck from the violin player, her fingers moving as if not attached to her hand, audibly creating her hallucinations for all to hear. Her dress transparent in the stage light gave way to her stockings, dancing in synchronicity with the swaying of her arm, piecing together the woes and wants of the typical man fantasy.  Which most typical men aren’t quite typical at all. They’re filled with wild sex fantasies of multiple woman and snorting copious amounts of cocaine, at the same time! Watching the Sugar Skulls on stage made that all seem possible. A roaring stream of sexual insanity flourished by the thrilling echoes of “love me” or “fuck me” or maybe that’s just what I was hearing… ah, I ache for more. The tenderness of each face radiates the stage with awe as my head bounces to the drummer’s strikes. He pounds the rubble into a feminine ensemble and makes everyone want to say, “fuck yea”.  As each sight shares an epic beauty, your attention is not held for long as equivalent qualifications jive next door. From the violin player I move center stage and find Ursula. Stunning. I have never seen a female bass player pound the foundation of the civilization that is Sugar Skulls like I did that night. Her fingers where quick and nimble, powerful yet full of finesse. Talented and tantalizing! I gazed in with a blank stare, unexpected of wild desire. Her eyes move across the crowd as if they were a politely rolling wave gracing the middle of the Pacific Ocean with a rustic groove. They locked with mine. I was thrown into a contortion of, YYYYEEEEEEAAAAAAAAA!! I rumbled with a furry that I hoped to be equivalent with the proportions of Sugar Skulls, and I believe it was. Answered by the drummer, I strode upon the blessed alter and proceeded to seduce and conduct the stimulation of sinful desire, of sexual destiny, of what the early believers called rock and roll. And yes, I rocked the fuck out to one nasty drum solo that my mind never fully comprehended in the first place. Nicely done. And yet, the light beams still reach beyond, further onto the stage to find behind a Motif which motive is to manipulate men into her malice and madness, the key player powered by the red vinyl tie strapped around her neck, holding on for safety as she shrills spoken words of acceptable insanity. Her left heel stomps in time as she simultaneously plays harmonies with crooked fingers of fantasy. At times pure punk was flowing, and at times the funk, at times the metal, at times Bob Ross’s scientifically experimental twin painted rainbows of sound waves overhead that dripped into the crowd and melted the wicked away. The Sugar Skulls finished and began to leave… but, they forgot about one thing, their promise! The promise of silly toys! Lighted gems and a model Chevy machine hung gracefully from my chain of glitter. Thank you key player’s mom, for the Marde Gras beads! They are hung in my home around the Buddha’s neck, in peaceful remembrance of the night I was saved, the night I found salvation. The night I saw the Sugar Skulls.
http://www.myspace.com/sugarskullsrocks 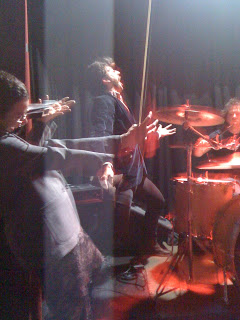 One thought on “The Sexual Insanity that is ‘Sugar Skulls’”